← There is True Beauty in the Breakdown Smashing Pumpkins & Fairy Fires = Best Day Ever! →

One Could Do Worse Than Be a Swinger of Birches 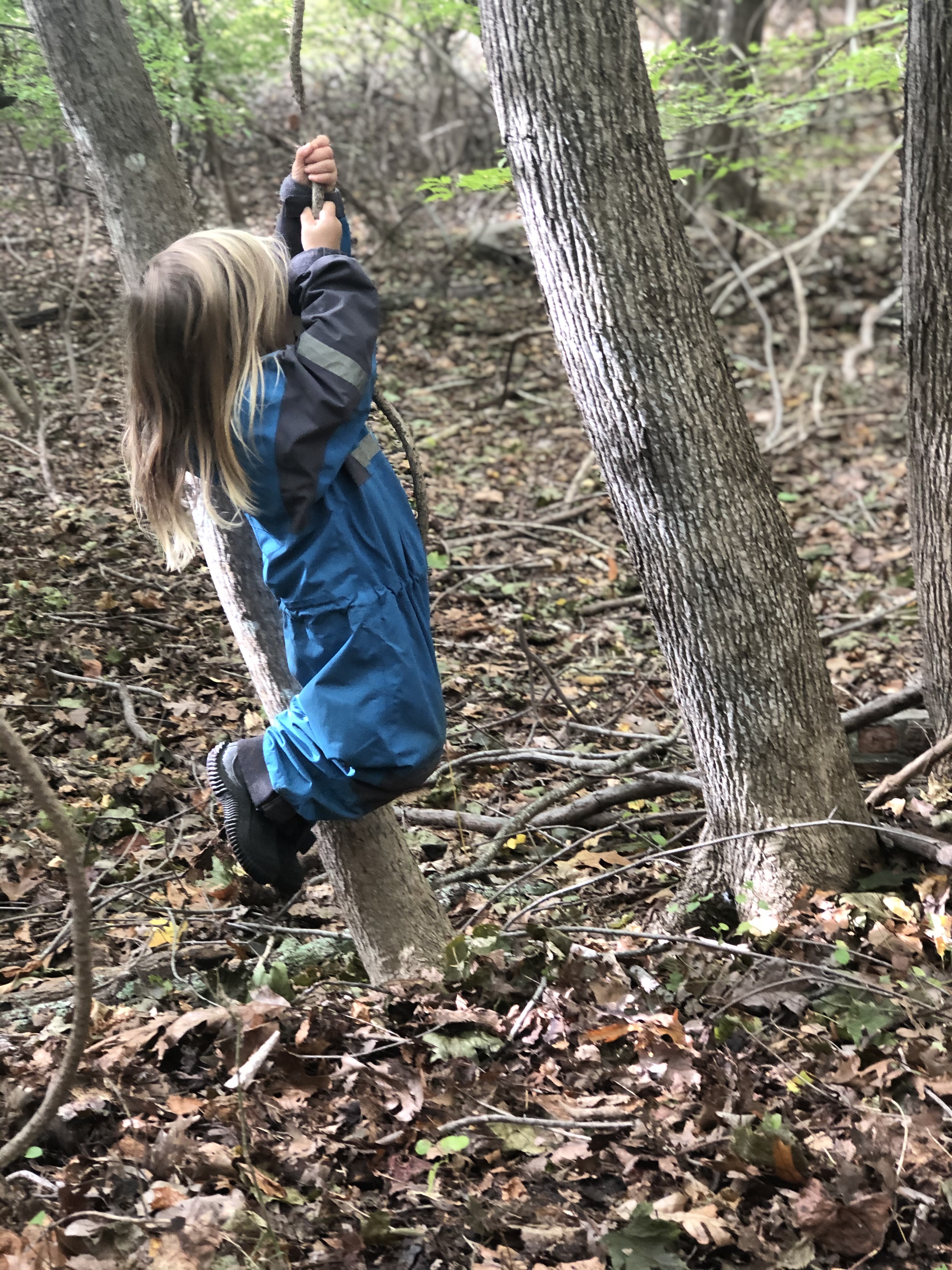 I’ve always loved Robert Frost’s poetry (The full “Birches” poem is below) and it was pure delight to see our learners swinging to the heavens, laughing freely, coming back down to earth and grounding themselves in the here and now. Our “birches” were actually vines and we tracked them high up into the tree canopies. After testing out their strength in various ways, we decided they were ready for play. They were hung on, climbed up and shimmied around and around. It was pure, spontaneous, unstructured play. One could indeed do worse than be a swinger of branches.
Before our community snack, we discussed the possibility of moving our “heart in the woods” gathering space, as we noticed some deadwood above. We asked the learners what they thought we should do about the problem and they decided it would be best to move our “heart” to a less hazardous area. Together, they scouted out a new space and helped us move and rebuild. After, we sat and ate together. Common sense, hard work and teamwork at its finest.
After our move, the vibe remained wonderfully mellow, with some learners laying under the tree canopies watching the falling leaves (what could be better?), others whittling their newly found journey sticks, while others finding friends to Nordic braid. Nordic braiding or sling braiding requires two learners, four wood cookies and some woodland. The learners physically swing the string bits back and forth to each other, communicating color and cadence to produce an authentic friendship bracelet that requires physical skill, solid communication, focus and patience.
As forest time usually does, our time together flew by and before we knew it, we were cleaning up and getting ready to sing our newest song, Happiness Runs by Donovan. It’s a beautiful song with lots of meaning and we’d be happy to teach it to you, as well.
Birches
By Robert Frost
When I see birches bend to left and right
Across the lines of straighter darker trees,
I like to think some boy’s been swinging them.
But swinging doesn’t bend them down to stay
As ice-storms do. Often you must have seen them
Loaded with ice a sunny winter morning
After a rain. They click upon themselves
As the breeze rises, and turn many-colored
As the stir cracks and crazes their enamel.
Soon the sun’s warmth makes them shed crystal shells
Shattering and avalanching on the snow-crust—
Such heaps of broken glass to sweep away
You’d think the inner dome of heaven had fallen.
They are dragged to the withered bracken by the load,
And they seem not to break; though once they are bowed
So low for long, they never right themselves:
You may see their trunks arching in the woods
Years afterwards, trailing their leaves on the ground
Like girls on hands and knees that throw their hair
Before them over their heads to dry in the sun.
But I was going to say when Truth broke in
With all her matter-of-fact about the ice-storm
I should prefer to have some boy bend them
As he went out and in to fetch the cows—
Some boy too far from town to learn baseball,
Whose only play was what he found himself,
Summer or winter, and could play alone.
One by one he subdued his father’s trees
By riding them down over and over again
Until he took the stiffness out of them,
And not one but hung limp, not one was left
For him to conquer. He learned all there was
To learn about not launching out too soon
And so not carrying the tree away
Clear to the ground. He always kept his poise
To the top branches, climbing carefully
With the same pains you use to fill a cup
Up to the brim, and even above the brim.
Then he flung outward, feet first, with a swish,
Kicking his way down through the air to the ground.
So was I once myself a swinger of birches.
And so I dream of going back to be.
It’s when I’m weary of considerations,
And life is too much like a pathless wood
Where your face burns and tickles with the cobwebs
Broken across it, and one eye is weeping
From a twig’s having lashed across it open.
I’d like to get away from earth awhile
And then come back to it and begin over.
May no fate willfully misunderstand me
And half grant what I wish and snatch me away
Not to return. Earth’s the right place for love:
I don’t know where it’s likely to go better.
I’d like to go by climbing a birch tree,
And climb black branches up a snow-white trunk
Toward heaven, till the tree could bear no more,
But dipped its top and set me down again.
That would be good both going and coming back.
One could do worse than be a swinger of birches.